In Laos, you simply have to slow down. Life here goes by the rhythm of sunrises and sunsets. By the rhytm of the rivers crossing the country. Nothing can accelerate it. 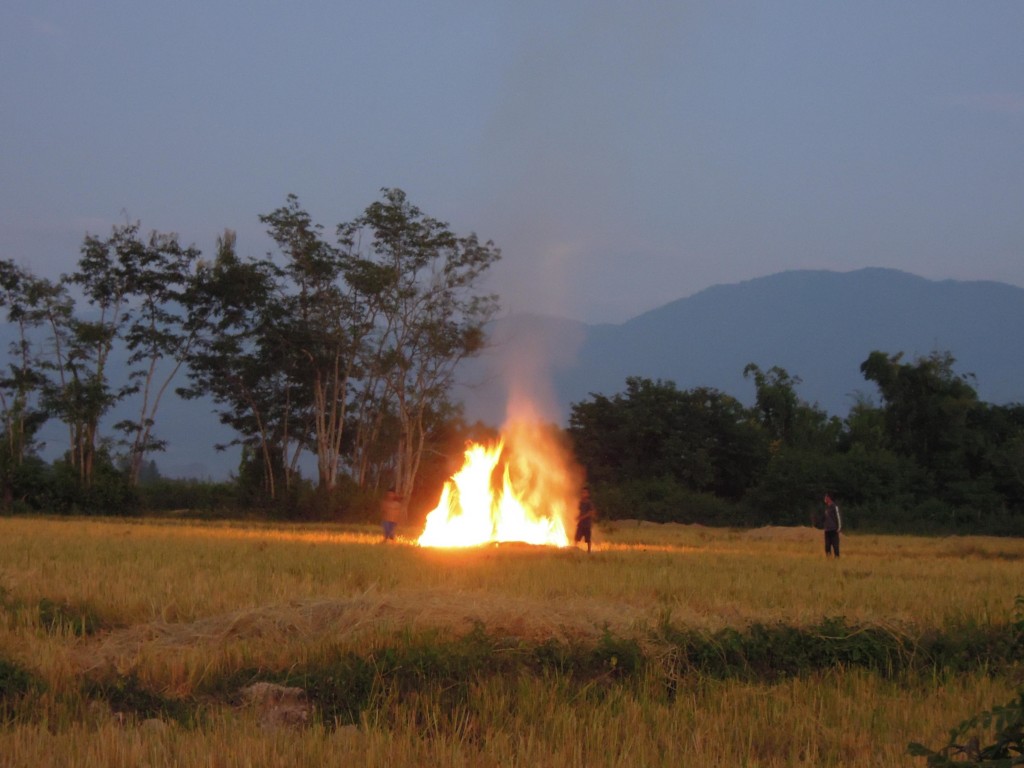 Arm yourself with patience, and empathy, and a good book.
If your bus left the station at about 8 o’clock and by 10 it only drove 10 kilometers because it was necessary to: refuel, change tires, pick up packages in several places and do some shopping for people in remote villages, and when it is already so packed that in order to get off to pee you have to leave through the window, be water. Abandon stress.

Very often there is only one bus a day serving a destination, usually very early in the morning, so despite your habits you will need to learn to get up at dawn. After dark, life in the towns is slowly dying to eventually surrender around 22, so it is easy to change your rhythm.

Phu That Stupa (a Buddhist sacred monument and a place for meditation), Oudomxay, photo by Martin Lehrmann

Do not be surprised if you see some sticky rice balls and flowers on the bumper of the bus. They are gifts for Buddha, who day by day saves vehicles from accidents on the most difficult routes.

Do not be surprised if the asphalt suddenly ends, and you will drive another 100 km on a clay and gravelly, bumpy „road”. Do not groan if at some point the road proves to be impassable for the bus and the driver tells you to shift your luggage onto a passing pickup truck and to walk the last bit on foot.

Do not complain even if just before you reach your destination, the driver suddenly remembers that he had something to attend to in the previous village and decides to turn back.

Finally, do not be surprised if the road is built especially for you by the dozer standing on the side of the road. Be water.

If you are traveling by river, because there is no rail transport and land routes are not too common either (why build roads when there are rivers) do not whine, when the carrier decides to cram the boat with excessive amount of people and their strangest luggage, like cast iron kettles and barrels of engine oil. Watch how the impossible becomes possible and learn.

Do not protest, if the price of the cruise seems to be high, not even if you saw how the local guy that was standing in the queue right in front of you paid half. Be glad that you haven’t been sent to the tourist agency for „falang” (the whites), where you would pay a sizable commission on top of the price.

Do not show your disapproval even when it turns out that a boat loaded with such difficulty cannot start because the engine got flooded. You can get off and have a smoke, because a pack of cigarettes costs less than half a euro, accept your fate and be water.

If you order something in a restaurant, and you will be doing it a few times every single day, because you will not find supermarkets in Laos, be prepared to wait even one hour, and be aware that the meals for the other guests at your table will be brought in fifteen-minute intervals. Learn to share what you get or agree to order the same for the whole group.

If getting your order is suspiciously delayed, even by Lao standards, you may be sure that someone has just been sent to the market to pick up the ingredients.

Mountain scenery on the way from Phongsali to Hat Sa (port on the river Nam Ou), photo by Martin Lehrmann

All you can do is to make sure that the waiter understood to continuously replace the empty bottles of „Beerlao” – the pride of national brewery.

Keep in mind that here in Asia there are different types of „yes”, and „OK” usually means „where did you get that idea?”. Do not try to understand it, just trust the body language.

You have certainly already been accustomed to the dogs waiting under your table for you to finish eating, as well as to flies, which share your meal with you, so even if you poured yourself a swarm of tiny ants with milk from a can to your freshly brewed coffee… be water.

Inhabitants of the tribal villages surrounding Phongsali come to the morning market to sell vegetables and herbs, photo by Pep Puig

With such a positive attitude, full of understanding and kindness, we drove through north Laos, not looking for monuments or high culture, but for getting in touch with local minorities and the world we don’t know.
First we discovered the dusty town of Muang Sing, an old French fort located within the Golden Opium Triangle, squeezed between the Burmese and Chinese border, where there is nothing but breathtaking views of the mountains, rice fields and exceptionally soothing atmosphere.

Here for the first time we tried the rice moonshine „Laolao”, we learned how much Lao people love karaoke and figured out that every guesthouse has a chicken coop behind a wall. It is best to find out which wall it is before you choose the room.

Here, too, we were cornered by three women from the Akha tribe that wanted to sell us their wares, or opium produced by their men. After we bought a couple of bracelets from all three of them for the sake of peace, a fourth one appeared and simulating tears began to beg us to buy something from her as well.

Doing laundry in the Nam Ou river is an activity for the whole family, Muang Khua, Laos, photo by Anna Mielczarek

A polite refusal did not help change her mind, so she chased us through half of the town cursing as much as possible until we got to our motorcycles.

Then we reached Oudomxay. A forced stop, the town that we expected nothing of, turned out to be a pleasant surprise.

In addition, it was some Buddhist holiday, so we have been lucky to watch paper lanterns floating in the sky and fireworks. We also came into closer contact with the monks, actually teenage novices who, as all boys at their age, showed greater interest in football than in religion.

The clerics of Oudomxay, located outside the tourist route, don’t have a chance to practice their English too often I suppose, therefore they were clearly eager to talk, and completely fascinated by our books and photographs.

We also visited Phongsali at the Chinese border, the highest altitude (1400 above sea level) provincial capital of Laos. Cold, plunged in the fog, the only city where from 5:30 am megaphones located on the streets scream communist propaganda.

In Phongsali however, many ethnic minorities living in harmony can be observed, and exceptionally diverse local food can be tasted, as well as tea originating from one of the world’s oldest plantation. We have also become accidental guests to two parties here: a christening, as well as… a funeral.

If it seems too difficult for you to understand how you can crash the funeral looking for a dinner, let me explain that we entered the restaurant, because we saw people there eating snacks, sipping Laolao and playing cards.

No one told us to leave, on the contrary, they invited us for a drink, so we drank for a long and happy life of the deceased, and the next day, already somewhat emboldened, to the promising life of a baby, we sang karaoke along and handed a modest gift in dollars. So hospitable are the residents of the harsh, mountainous northern Laos.

Viewing point on the hill in Muang Ngoi Neua, photo by Anna Mielczarek

Then by water we arrived to Muang Khua, a small „port” village that seemed to be a tropical paradise compared to Phongsali. Happily we hid our jackets deep into the backpacks.

Food got worse though, so we consoled ourselves by drinking Beerlao on the terrace overlooking the river, watching piglets wallowing in the mud and families coming to the river for an evening bath or to wash underwear.

As it was Saturday, there were wedding celebrations in town; however, still remembering the hangover after the christening, we decided to pass on it.

The views over the river Nam Ou between Phongsali and Luang Prabang are extremely picturesque and the route is considered to be one of the most beautiful in the entire South- East Asia.

Therefore we enjoyed the somewhat long waterway to Muang Ngoi Neua, the last stop before the cultural capital of Laos, Luang Prabang, and thus coming back to civilization.

Boats, the only means of transport, docking in Muang Ngoi Neua, photo by Anna Mielczarek

Muang Ngoi Neua, attainable only from the river, without cars, internet, and even without electricity (few generators get turned on daily only for 4 hours, between 18 and 22), is still full of tourists, with numerous restaurants, bars, shops, laundries, and even cobblers and massage, not to mention the tourist agencies that offer organized trekking trips with a homestay in a tribal village.

It becomes very cozy here in the evening when the candles are burning in the windows, and tourists walk the streets with flashlights on their foreheads, adding yet another idiotic element to their look. A typical tourist outfit looks like it was entirely taken from the latest collection either of Decathlon or India Shop, or even worse, directly from farmers of the rice fields as it is in the case of so-called mimetic tourists, wearing pointed hats and shortish bamboo linen pants.

Landscapes in Muang Ngoi Neua are second to none and it will remain our favorite little town in the country. It is necessary here to rent a bungalow with a terrace overlooking the river, lie in a hammock, and watch the butterflies and… be water.